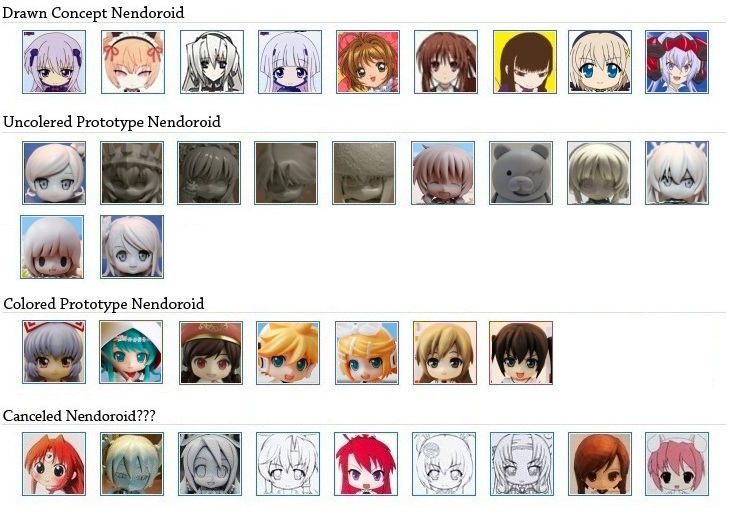 Akira
This list should be updated, because is really helpful :>
hace 7 años

Ive been a Nendoroid lover/collector from the start of their production, I hardly can't wait for each Nendoroid news/update and read Mikatan's blog every single day.
Also I have been collecting Nendoroid from the start and completed the fullsized line till now ^_^

I noticed that over the years some Nendoroid where made concepts on or prototypes but are still not released.
Can you please tell me what Happened to them?

Im talking about these concepts/prototypes:

WF2007 concepts Nendoroid Amiko (AmiAmi Mascot) & Tokuko (Hobby Search Mascot) & Ignis (Jingai Makyo)
Both Amiko and Tokuko I only seen a draft for on 1 wonfes so I guess they are cancelled?
But Ignis we saw also in Hobbymag and Wonfes 2008.

HobbyMag entries of the Hyakka Ryouran girls Sanada Yukimura, Naou Kanetsugu & Gotou Matabei.
After their announcement by FREEing in the magazine there was no more news on them.

WF2009/2010 prototype Etna & Flonne (Disgaea) by Phat company
they where shown 2 times on wonfes and disappeared after that.

Could you please reply me with some answers on their status and if they where cancelled or not?

I would also like to ask what the status is on Nendoroid Haruka & Kana Minami, Sasara (Final Dragon Chronicle) & Faris Nyannyan (Steins;Gate)

I am a really big fan and so I'm concerned about them.

Did something happen to the teased prototype of Fate Testarossa (movie 2nd)?
Because she was teased to be shown on WF2012s but no one has seen her :(

I would be very glad if you could answer on my questions on the status of these Nendoroid.
And I will thank you in advance awaiting your response.

yakumo You said Nendo?
tvema • hace 8 años • #1071795Anybody know anything about Sasara... i'm scared that she could be canceled

tvema
Anybody know anything about Sasara... i'm scared that she could be canceled
hace 8 años

by who was it confirmed???
do you have official proof?

further there was no news on her
hace 8 años

ueggg98
Ignis was confirmed cancelled a while ago. The others, probably, but there's no proof. ;.;
hace 8 años