isimpovermika
if anyone is looking for this figure, ive found someone selling it pre owned on amiami for 157.62 usd! heres the link :))
www.amiami.com/...
i wanna buy it but im broke LMAO
10 horas antes

I would recommend not buying from this seller. She sent me an unopened figure that was broken, of which I paid almost $300. I politely told her ahead of time that I was filing a dispute on PayPal, because I wanted to be refunded. We would have to go through them anyway. I was willing to send the figure back and get a partial refund or keep the figure and get 40% back, for example. I was willing to work out some sort of a deal without having to escalate it to a claim. I didn’t want to get PayPal involved, because I knew it would be a nightmare. I thought we could settle it as adults. I apologized, because it was an unfavorable situation for her. I felt bad that she would get the figure back with decreased value, but I couldn’t accept a broken figure. It took me a long time to come to the conclusion to send it back, because I was torn. She insisted that there were “no refunds”, and that I got what I paid for at my own risk. She told me that it was the manufacturers fault, that she isn’t responsible, and that I will NOT be receiving a refund. Apparently, she doesn’t know how PayPal works. Instead of offering solutions, she became irate and immaturely posted an article, trashing me on MFC. She stated that I was trying to scam her and was threatening her, none of which was even slightly true. I told her to show the community evidence, of which she had none. I had bought the figure previously from a seller who didn’t realize it was damaged from the previous owner. Since I had told her this before purchasing the figure, she accused me of trying to switch the figures out, which is just absolutely insane. I got refunded for that figure, of which I showed proof on PayPal, so I would have no reason to switch them out. She also stated that I was trying to get a refund from her without sending the figure back, which was obviously an assumption on her part. OF COURSE I would send the figure back. I never said I wasn’t going to send the figure back. That doesn’t even make any sense. I have gone to her page to view the article she posted, but I couldn’t find it. She either does not have her articles public, or she removed it. Finally, SHE escalated the dispute to a claim. PayPal favored my case and evidence, so I shipped the figure. I took pictures and recorded a video of me boxing the figure to show she was not damaged beyond what was in the claim. I paid $100 in insurance to get the figure safe to her overseas, and also to cover expenses in case it got lost in the mail. Since this pandemic has delayed shipping, it was in customs past 30 days. PayPal automatically favored her, because a package is considered lost after 30 days. You would think that would be fine and that I could just file a claim with USPS, since I paid insurance. No. I couldn’t get my money back from USPS, because the new rule is that mail is not considered lost until after 60 days, due to COVID-19. PayPal still uses the 30-day rule. So, she now has my $300 and the figure, and I have no figure and have lost $400. I have been collecting 20 years, and I have never encountered anything like this in my life. She never once tried to help and was spiteful the entire time that this has been occurring, over a month. Good sellers back their products. For all I know, the figure could have been opened previously and broken by her. Unlike her in blaming me, I took her word that it was unopened. It probably wasn’t any fault of her own that the figure was defective, but when a buyer receives a damaged figure that they paid $300 for, when it was supposed to be unopened, a good seller will work with them to come to an agreement. ALL my secondhand stores in Japan have worked with me in the rare instances that a figure has been damaged. I am usually offered a full refund or a discount. I always back my figures when I sell them. I want my buyers happy. Lesson learned. I’ll stick to my trusted stores. If you buy from her, just hope nothing goes wrong or you will have to fight it, and there is a chance she will get the figure back and keep your money. She’s simply trying to get rid of her entire figure collection (as stated on her page), which is different from a seller who enjoys the hobby of figure collecting.
Hace 3 meses 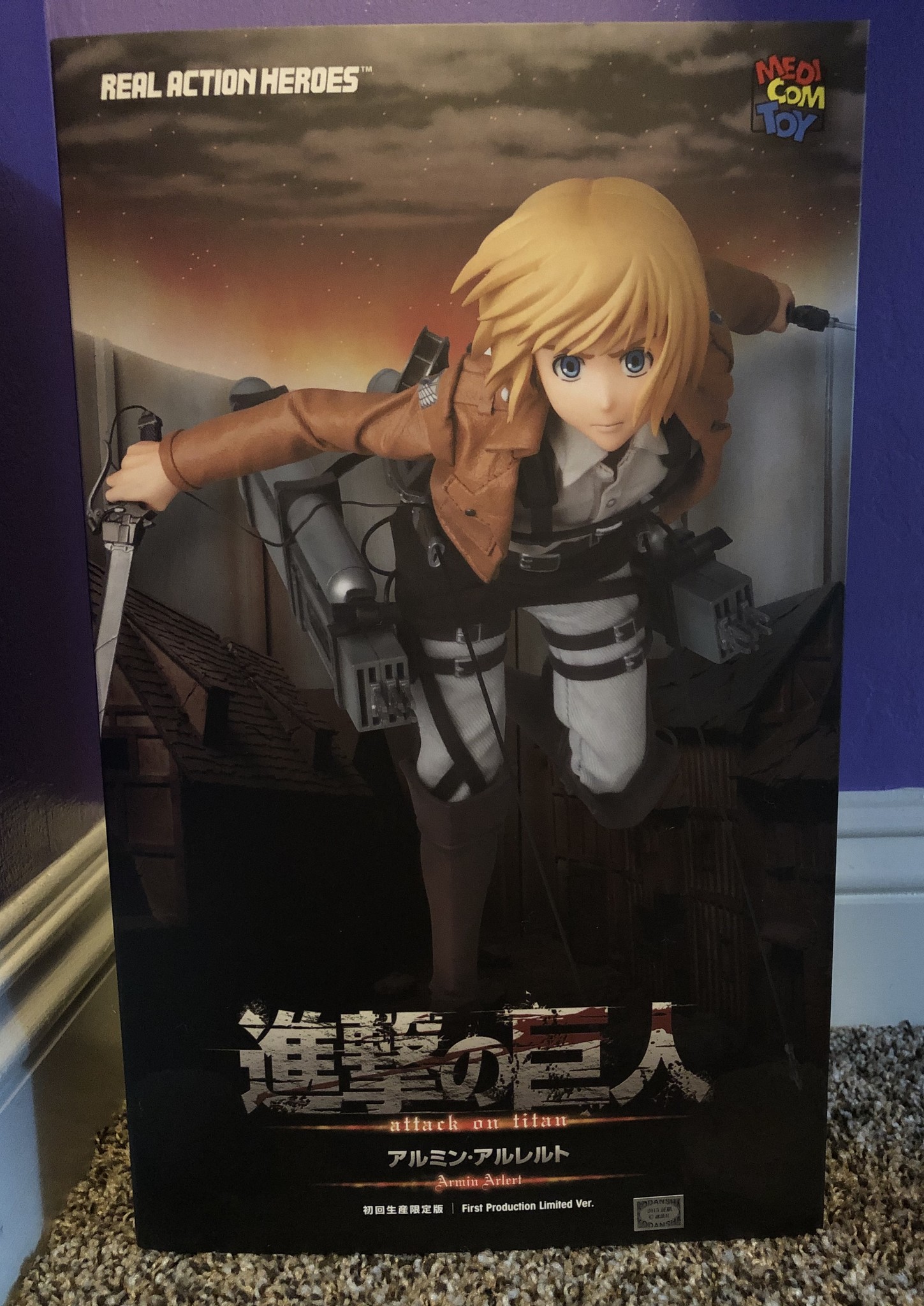 Selling my brand new never opened Armin figure for $100 USD this includes shipping. Please pm if you are interested or have any questions!
Is this still available?
Hace 3 meses

Selling my brand new never opened Armin figure for $100 USD this includes shipping. Please pm if you are interested or have any questions!